From Hawaii With Love

I found paradise. And it’s on an island called Oahu.

It was my first time visiting Hawaii, and boy, was I ever amazed. I didn’t expect to fall completely in love with Hawaii as much as I did. The soft, white sand, the turquoise shades of blue in the ocean, the lush and exotic trees surrounding the island. It truly was an enchanting experience, and these photos do not do it justice. We were able to rent a car and explore all the different regions of Oahu – like Honolulu, North Shore, Leeward Coast, etc. Since it’s such a big and busy island, you don’t have to rent a car to get around. The city’s transit service, TheBus, is very efficient and cost effective (a day pass is $3.75). I noticed that the busses go to all the different beaches on the island, as well as all the popular hiking trails as well, even from Waikiki to the airport. It’s also a walking city with lots of shops, restaurants, and cafe’s everywhere, so there’s really no need for a car. Since we wanted to see as much as we could of the island in such a short period of time, we decided to rent a car. Here are my top picks from our trip, including some tasty vegan places to check out if you ever find yourself in Honolulu! 🙂 The North Shore was probably my favourite of the trip. It’s located about an hour away from Waikiki, and is a smaller surf town where locals ride monstrous waves not fit for the average swimmer. Still, the water was safe to swim in, and I even took a dip before the waves got too intense. The water was crystal clear and beautiful, with soft sand to sink your toes in. I especially liked the relaxed, chill vibe of the place, and the fact that it wasn’t tourist central like Waikiki beach. Sometimes they even hold surf competitions here. There weren’t any surf comps the day we visited the North Shore, but I was lucky enough to see a guy surf some gnarly waves, though. 😛 Hiking Diamond Head (the mountain pictured behind me) is a relatively easy hike with insane views of the island, but the one thing we didn’t like was that it was packed with tourists. The views were great but if you’re an intermediate hiker, you won’t like this trail since you’ll be stuck behind slower people doing the hike with you. There is an alternative to the Diamond Head trail which doesn’t have narrow paths and is far less busy. I will discuss that one near the end of this list 🙂

Located near the entrance of Diamond Head Park, you will find delicious and healthy smoothie bowls to refresh and energize you after the hike. They also have several other vegan options for people who want savoury over sweet. Another gem on the island, Hanauma Bay is famous for its coral reefs and massive sea turtles. I unfortunately did not get to see any turtles, but I did find many stray cats around the island. You can also rent snorkeling gear here if you’re feeling up to it. I didn’t go but apparently it’s incredible as you can swim with all of the fish! Also, the coral reef is very dangerous and you have to be careful not to touch it or it will effortlessly slice your skin open. Yikes!

This was a great find in the Chinatown area of Honolulu. Simple Joy Vegetarian is a small Buddhist restaurant that features veganized Asian dishes with mock meats like “chicken” chowmein, “beef” and broccoli, etc. Not pictured, but I got the vegan steak with potatoes peppers, onions, and mushrooms, and it was incredible. Closest thing I’ve had to steak in a long time! Very flavourful and cost effective as well. My favourite dish here had to be the banana flower salad, though. Here’s a picture I found from their Yelp listing. It’s a must-try. Very fresh and tasty. 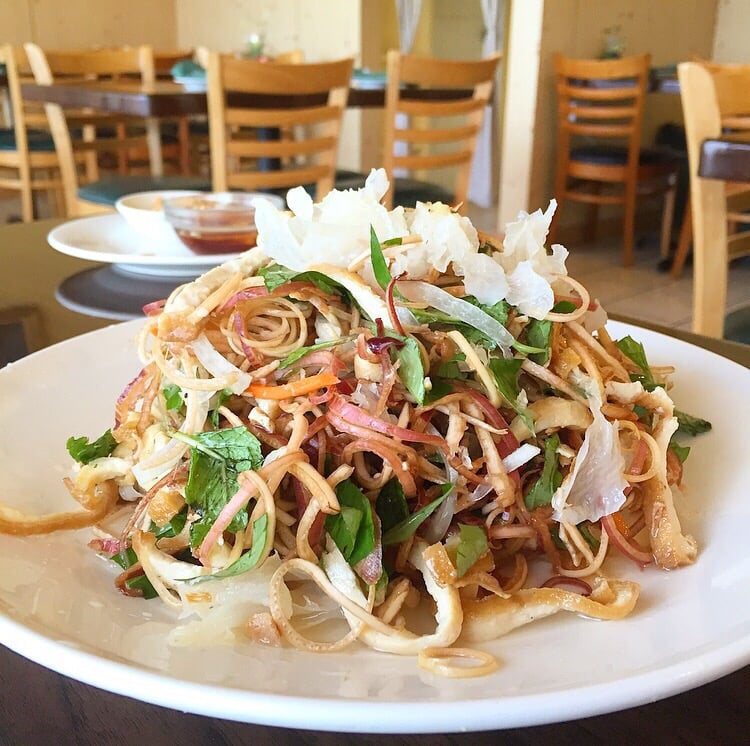 The Lighthouse Trail hike is perfect for those who want to see incredible ocean views similar to that of Diamond Head, but also want to ditch the busy tourist areas. This hike was about an hour each way if you take your time, and there is definitely a lot to see here. It’s not as busy but it was definitely windy, so be sure to bring a jacket or sweater with you if you hike in the morning or late afternoon. We visited Chinatown in Honolulu and found a hip and trendy diner that serves vegan mock meat as a substitute for all of their meat dishes – burgers, sandwiches, even wings! The vegan chicken wings were fantastic, and even looked scarily close to the real thing, despite being on a popsicle stick. Heh heh. I got an amazing sandwich – the vegan pesto chicken, which again, tasted very much like chicken, but better! The diner was super stylish and very millennial – filled with tattooed, bearded servers sporting names like “Nick Danger.” The service was excellent and the food was cheap and tasty! The Ko Olina Resort features 4 human-made lagoons that are still very exotic looking, yet safe for families and children as the deep and dangerous depths of the ocean are blocked off. You can only find these gorgeous lagoons at the Ko Olina Beach Resort, but visiting them is free of charge if you drive out for a day trip. We visited each lagoon around the resort, and there were nice walking paths connecting them to all of the resorts. The water is calm and safe for snorkeling if you choose to do so, and it was also safe for swimming. My favourite was Lagoon #2 which had ample space to relax and was less busy than the other lagoons at the resort. You had to walk through a relaxed, suburban neighbourhood to find this hidden gem of a beach. We walked down steps by a house which allowed beach access, and found ourselves at Sandy Beach, which is where the locals go to surf and tan. There are also food trucks nearby which offer beach food and refreshing smoothies and juices. I had some Hawaiian shaved ice and it was fantastic! Also on the day we went, the waves were large and powerful, and I watched in shock as people were demolished by the ferocious tide. There were even signs which warned of dangerous waves and a lifeguard on duty who told visitors that there was a high risk of injury or drowning here. I didn’t go into the water, but it was fun to sit back, relax on the warm and soft sand, and watch body surfers attempt to ride these massive waves. Despite the dangers of going into the water here, I liked how quiet and tourist-free this beach was. It was a perfect last day in Oahu, and the day I got the most burnt/tanned. 😛 Not only was Hawaii a much-needed vacation, but being on the island also really opened my mind to all of the possibilities of life and travelling. Questions began to arise in my head and I couldn’t seem to shake them off. What if you lived a life you didn’t need to take a vacation from? And what if every day you could find pleasure within your work, feel the sun on your skin, and feel total and complete satisfaction and peace? I swear I will move here one day. Until then, I have many photos and beautiful memories to last me a year or two.

How To Stay Fit While Traveling

Looks like you had an amazing time! I love your pictures. Planning to go to Honolulu soon so I will definitely keep your post in mind! Thanks 🙂

Thanks Suzanne. Definitely check out all the spots I recommended. You will LOVE the island! Enjoy Xo

Absolutely beautiful! Would love to see Youtube videos of your travels in the future. 🙂

Hey Annie, I don’t have a Youtube yet, but I’ve definitely thought about it. If more people start suggesting it, I might look into creating a page. Thanks 🙂